Darius Khayat is not your typical San Marcos attorney.

While most skilled young lawyers feel an unbearable pressure to be “good soldiers” and serve the needs of large firms, Darius has always believed that the client comes first and everything else comes second. This philosophy animates him and his practice: he thinks of himself as a “family lawyer” in the same way you might think of a “family doctor” or “family dentist.”

To that end, Darius is relentlessly focused on building connections with his community (which he loves and serves), cultivating long-term relationships with his clients (most of his new clients come from referrals from old ones), and educating business leaders and families so that they can make better decisions, deliver better products and services to their communities, and live more fully engaged lives instead of getting caught up in legal frustrations and minutiae.

After all, the purpose of legal documents – be they abstruse, 50-page commercial leases or simple advance healthcare directives – is to make life less stressful and less complicated, not more so. Unfortunately, this spirit often gets lost – buried under legal gobbledygook. Darius believes that clients can actually have it all: customized, empathetic legal help coupled with the resources, knowledge, experience and passion to fight for your rights and dreams.

Darius has practiced law in the City of San Marcos for over 29 years, 13 of those in a partnership with another attorney and ten years as a solo practitioner. His client list includes a wide variety of people, from single retirees on fixed incomes to business owners of some of the larger employers in North San Diego County to Manufacturing, Retail, Commercial and Professional companies and organizations.

He is very involved in local, charitable organizations, and he donates his time pro bono. He is the current President of the San Marcos Lions Club Foundation, and he was also appointed by the School Board to serve on the Bond Review Committee for the San Marcos Unified School District. Darius also served for nine years as the elected Secretary of the San Marcos Economic Development Corporation, a City committee formed by the City of San Marcos to advise the San Marcos City Council and Staff on issues concerning economic development.The City Council of San Marcos also appointed Darius to the General Plan Amendment Committee. This committee assists in the update of the City’s general plan, and it will form the guidelines for the remaining development in the City of San Marcos before reaching build-out. He is also a board member of several other charitable foundations.

A native Californian, Darius lives in San Marcos with his wife, Robin, and his three children. In his off time, he enjoys spending time with family and tinkering with various projects. Darius is an avid mountain bicyclist and races amateur class in the U.S. Cup National Series.

The Law Office of Darius Khayat serves San Marcos as well as surrounding communities, including Carlsbad, Vista, Escondido, and Oceanside. Call us now: 760-591-0245. 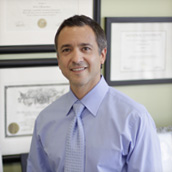 Back To Our Team